A micro-farm in the heart of Versailles. Testimonial.

An agricultural experiment, inspired by permaculture, on a classified site in the heart of the city. 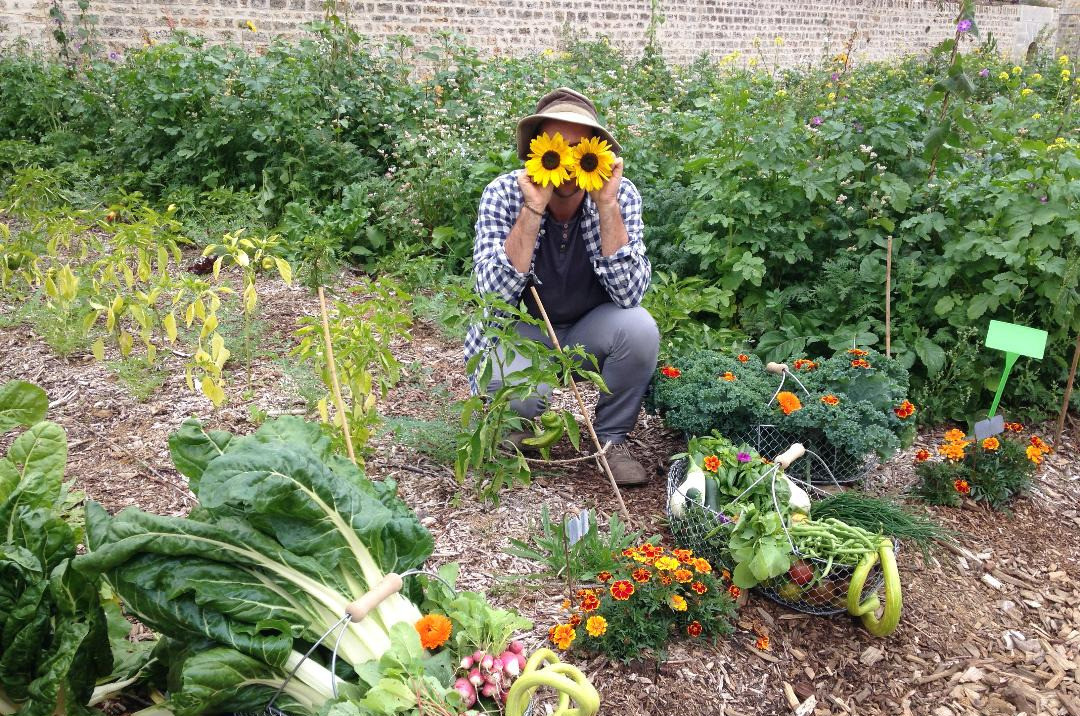 « Eating local » is increasingly à fashion, but the expression mérite of précisions : if a short circuit will not have more than one intermediary between the producer and the consumer, other designations such as local or proximity remain more vague. Depending on the interpretation (specific to each distributor), the products on our tables will have traveled distances of between 30 and 160 kilometers!

But how do we produce local produce in the heart of a city? As this video shows, the term encompasses different forms of activity, the implementation of which will depend on the local context.
(Source CEREMA - Centre d'etudes et d'expertise sur les risques, l'environnement, la mobilité et l'amit&nagement)

To each context, its project

These few words résument the exchange with G. Degroote, a militant entrepreneur who, after 15 years of consulting in corporate social responsibility, decided to experiment with a form of urban agriculture, a micro-farm - organic and inspired by permaculture - in the heart of the oldest district of Versailles.

We asked him a few questions.

At the end of the seventeenth century the gardener of Louis XIV, La Quintinie, conçoit the Potager du Roi, a fruit and vegetable garden of 9 hectares that will feed the table of the King and his court. La Quintinie is a bit of a precursor to the cultivation of early fruits and vegetables: he uses innovative techniques for the cultivation of fruits and vegetables, such as growing on a hot bed. He created a productive and beautiful site, while participating in the progress in the knowledge of plants. His legacy made the fame of the Parisian maraîchers of the XIX century and even inspires contemporaries (bio-intensive method)

Cultivating in the heart of a city, it’s complicated ?

In the city the first challenge is to access the land in the long term: the sites that remain unbuildable are often classified or protected or too polluted. I was lucky enough to obtain an authorization from the Château de Versailles to rehabilitate this land…by cultivating it.

The surfaces in the city are limited and one must learn to optimize the space, associate the crops and maximize the rotations. The necessary resources can be found in the surroundings: my soil comes from the Saclay plateau, 15 km from here, the water is collected from the roofs of the neighboring buildings, but getting it to the farm has proven to be complicated at times, the machines don't always get through! On the other hand, there is no shortage of willing arms.

The greatest difficulty remains to find the right balance of financing, at least to cover the investment on the other hand: in my case, this was possible thanks to a company that is setting up its new headquarters right across the street and that provided me with the necessary financial support and backing.

Can one make a living from small area market gardening in the Paris region?

However, to truly understand the economic model, one must look at the positive externalities of the project: carbon capture is a clear example, but there are others. A farm can be a link in the recycling chain of organic matter from waste sorting. I am considering, in synergy with other local actors (e.g. businesses in the neighborhood), investing in an electronic composter, which will transform the organic waste of the neighborhood into compost (to be used again to feed my soil or resold) more quickly.

Another example: many local governments are building large water collection tanks to bury them in the ground in case of excess rainfall, to counter the risk of flooding in a context of climate change.  A micro-farm with water basins becomes an additional buffer zone in a city and this service is potentially monetizable.

Finding the viability of the project is one of the reasons for my adventure, I want to create a sustainable cosystem and show that it can be replicated, even if each project adapts to the specificities of the territory.

Do you think these farms will be able to feed the cities?

I'll give you some figures from the Institut de l’aménagement et de l’urbanisme : l’Île de France counts 12 million Ile-de-France residents and 5 000 farms, mainly dées à the cultivation of wheaté. In 40 years two thirds of the farms have disappeared, an estimated annual loss of 2 000 hectares of farmland per year.

Urban micro-farms can not produce enough. Urban farms are the key, like on the city of Rennes. It is necessary to sanctuarize these lands outside the cities that can actually produce in quantity.
A micro-farm like mine serves mainly as a bridge between the city and the periurban, it allows an awareness and to spread knowledge in agricultural techniques.

In &Iircle-de-France, 40% of farmers are leaving in three years. What will become of these lands and who will cultivate them ?