Africa: To the Conquest of the French Language

All Languages Are Colonial, as soon as You Use Them!

In the Beginning, the French Language Was Sovereign

A language is an inescapable tool for communication and, words are one of the tools of expression. Even if it is impossible to dissociate language and culture, it is possible, even though difficult, to dissociate a people from its mother tongue. This is particularly the case for Francophone countries in Africa where the forced use of the French language in colonies was one of the tools of cultural alienation of the people. Many were forced to adopt the language of the colonizer, presented as the language of civilization, and to abandon their national languages, pejoratively described as "vernacular" languages, that of the common people residing in the Platonic cave, as opposed to that of the colonial master.

The use of African languages, especially in Francophone Africa, was even censored in schools and rebels or negligent ones were severely punished[1]. Imposed in the educational[2] and administrative system, colonized peoples were "forced" to disregard all vocabulary from their native language in order to learn new words, tones, accents and rhythm from a foreign language[3].

Although adapting to the new grammar and transitioning to French was long and painful, it was mostly successful in many African countries since French is now the official language. And the forecasts of the Organisation Internationale de la Francophonie (OIF), even reveal that Africa will regroup in 2050 about 85% of the world's French speakers.

This brief historical reminder was not meant to dampen your spirits or develop any sense of guilt, pity or remorse because no language falls from heaven. All languages are colonial, whether the "colonization" in question was violent or by other means. The Romans colonized Gaul, the Arabs colonized the Berbers, and all of them brought their language and their religion. What matters is the usefulness of each language, here and now, and the attachment that its speakers have or do not have to it. This reminder, thus, simply aims to describe a historical reality to enable us to better appreciate and understand contemporary dynamics in the French language.

Transforming the Sovereign into a Suzerain? 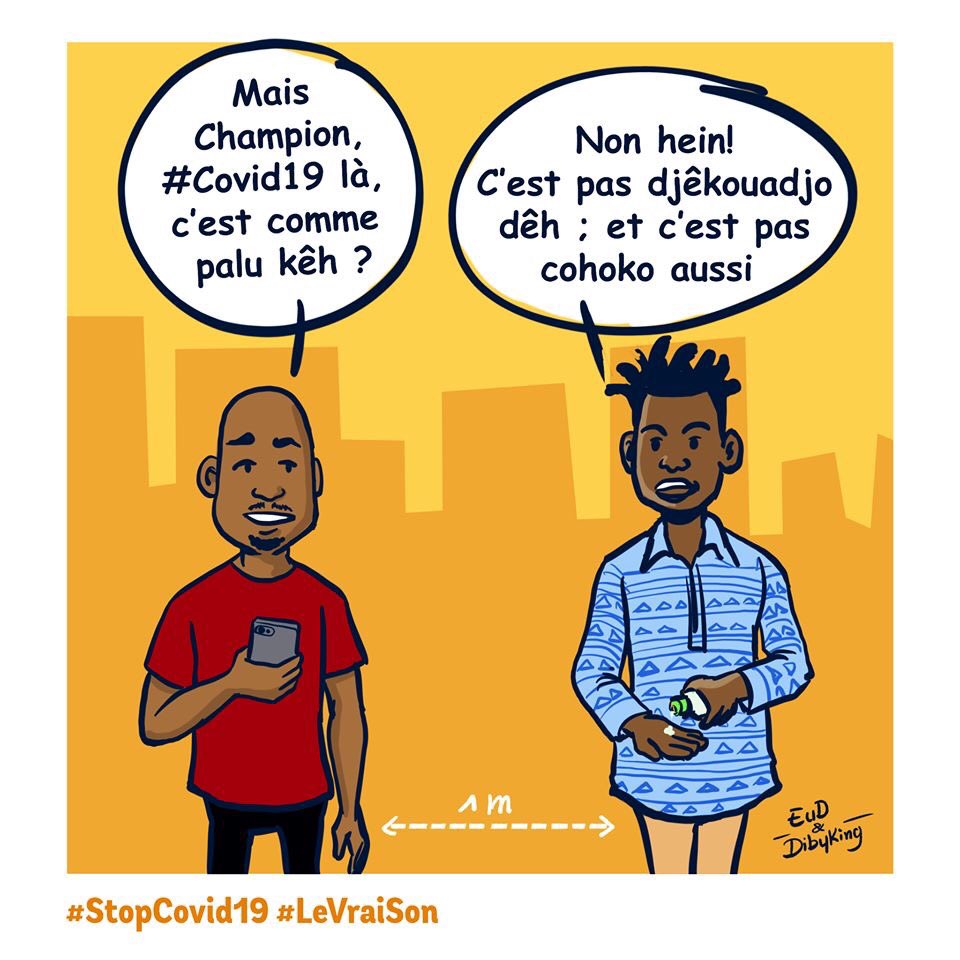 In fact, after several years of passive submission,  some African intellectuals have "rebelled" against this form of linguistic imperialism and decided to tame the French language by "vernacularizing" it.

Initially consecrated as elitist with rigorously prescriptive grammar and a vocabulary closed to external contributions, the French language has gradually opened up to remain alive and not ostracized.

In fact, African intellectuals such as Sony Labou Tansi and Ngugi Wa Thiongo, have long advocated for the use of African languages as official languages, as tools for education[4] and public communication and not only in private. They laid down the principle that there is more to be gained (soft power) if the child's first acquisitions are in their own language. But this issue is not as simple as it seems.

First, languages can be very numerous (nearly 300 in Cameroon, Senegal, Mali etc.) and then the difficult question arises when it comes to what choices to make or simply the level of mastery necessary to teach these languages.

On the other hand, there is the practical problem of which language or languages to teach, in a given place, without awakening the demon of susceptibility, when we are now more aware of the fact that, with the movement of populations, several languages can be found in the same space. Secondly, what process should be used to introduce these languages? On the basis of what relationship to French? How to organize the cohabitation between French and national languages? With what didactic and pedagogical means?

From Resistance to Reinvention of the French Language 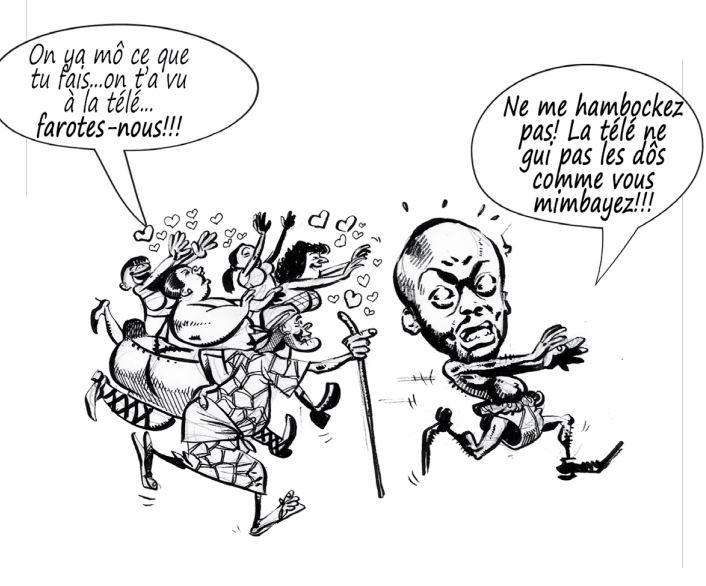 African countries (Madagascar and Mauritania for example) faced with these obstacles at the level of linguistic policies, decided to fully embrace the French language but by twisting, reinventing and contextualizing it to the socio-cultural realities of the speakers.

In this vein, the writer Kateb Yacine advocated for the French language to be seen as "spoils of war" inherited from France. And since the use of spoils of war depends on who owns it, the norms the French language use should not be dictated (imposed) solely by France or any other colonial power such as English, Portuguese, Spanish etc. Many other African intellectuals (Mongo Béti) encouraged the introduction of neologisms from African languages and the disregard of grammatical, lexical and syntactical norms in communication.

In other words, these intellectuals encouraged a colonization of the French language by African languages. Decades later, it is interesting to observe the effect and influence of their ideas on contemporary French. Although there are many posts of observation[5], I will do so primarily through the lexicon of the French language.

African Influence on the Lexicon of the French Language

In the 1970s, the AUPELF (ancestor of the Agence Universitaire de la Francophonie, AUF) had initiated the 1st census of lexical particularisms for each French-speaking country in Africa and a synthesis was published in 1988 and 2004 in the Inventaire des particularités lexicales du français en Afrique noire[6]. I recommend that you look at page 39 of this inventory to see all of the terms in this lexicon. The words I use in the examples below were not originally in the hexagonal or so-called "standard" French lexicon, they are mostly borrowings and new creations.

In Cameroon, we have gombotiser [bribe], bendskineur [motorcycle taxi driver called "bend-skin". Or avoir deux bouches (have two mouths) from the Côte d’Ivoire, to mean "be hypocritical"

Despite fifty years of Arabization, French is more ubiquitous than ever in the streets of Algiers. For example, the word novembriste in Algerian French indicates a "person who participated in the Algerian war of independence unleashed on the first of November 1954 [...]". 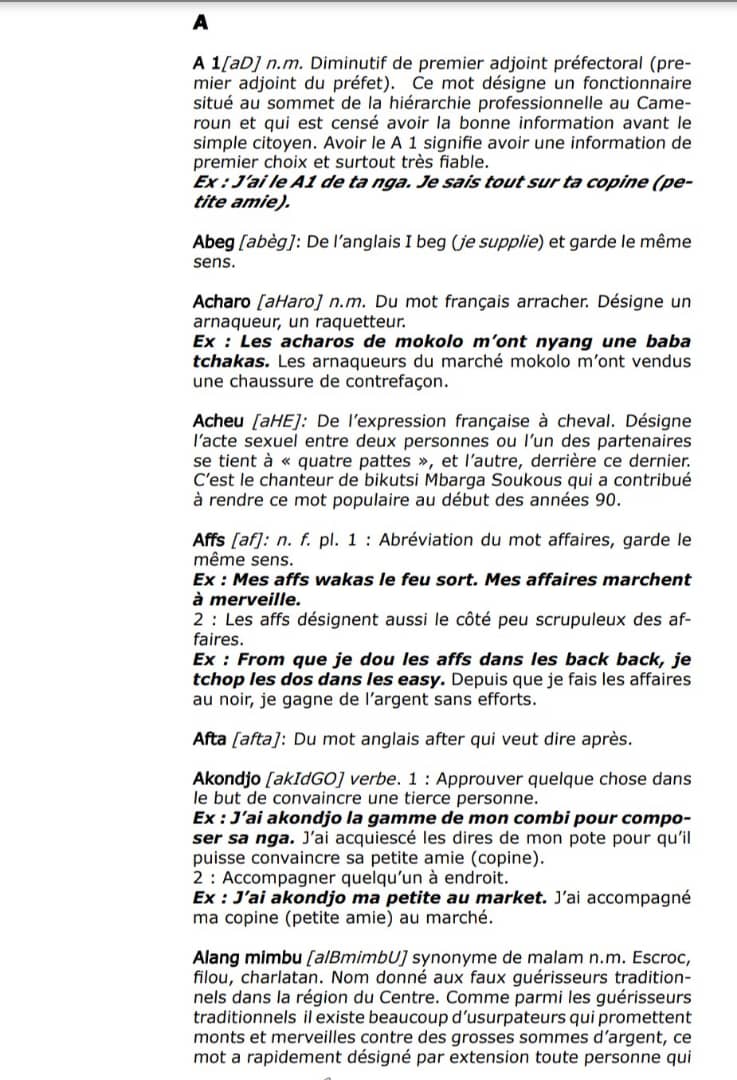 In Cameroon, linguists have created suitcase words like camfranglais or francanglais[7] to designate the set of lexical or semantic neologisms resulting from the intermingling of French and the national languages.

An illustrated dictionary of Camfranglais terms was developed by Valérie Dongo[8] and is downloadable as a PDF here. Another searchable online francanglais dictionary is available here and the latter was enlarged by Paul Willekens.

The word grossir in Cameroon, Central African Republic, and Chad means "to impregnate, to conceive". In Cameroon, acheter qqn (buy sb) means "to corrupt" and in Algeria, the verb bouffer expresses another meaning than "to eat", it is rather the meaning of "to embezzle, to steal the goods of the state" that is expressed.

In Côte d'Ivoire, the term pneu de secours (spare wheel)  means "occasional mistress" and in Senegal, a grease and a aid of understanding mean a "bribe". In Algeria the word government means "government services" and by metonymy the "building housing government services".

The word madame in Central African Republic indicates a "teacher, schoolmistress"; coller refers to a sensual, tight dance between two people in Cameroon while in Mauritius it means "to repair a puncture with glue". The word permit in Rwanda and Cameroon refers to "driving license".

It refers to the use of proper nouns as common nouns. The word prudence (brand name Prudence) for "condom" in Chad, bic (brand name Bic) for "ballpoint pen" or omo (brand name Omo) for "detergent" in Algeria.

Finally, the French-speaking World Is a Mosaic of Cultures

These lexical peculiarities reveal the ability of French to adapt in contact with other linguistic communities to the point that instead of treating these peculiarities as "barbarisms", linguists acknowledge their existence and report on them in inventories and lexicons.

Beyond lexicons on particularities, it is important to historically study particularities and to systematically conduct etymological research. This will contribute to a better appreciation of diversity within the Francophone space which is a mosaic of cultures.

[1] This was, for example, the case of one of my teachers of philosophy and epistemology at the University Of Dschang, Pr. Charles Robert Dimi, who was whipped for expressing himself in bulu his mother tongue.

[2] The African francophone school is the heir of the French school of which it has kept the spirit and the main guidelines. The languages taught there are therefore mainly the major languages of international communication whose number and status vary from one country to another

[4] In St. Louis, Senegal, the schoolteacher Jean Dard landed in 1816, and he opened the first school in Africa. He began by learning the local language and undertook to train his pupils with it, thus anticipating a debate that is topical today: the introduction of national languages in schools. But the experiment of this bold teacher lasted only one year...

[8] To show his originality to the outside world, the author has divided his lexicon into two major parts, the first of which deals with CAMFRANGLAIS words (page 8) arranged in alphabetical order with their phonetic sounds, translations and supporting examples. The second part is about purely Cameroonian expressions or "Cameroonized" (page 62)

.
Add to my playlists 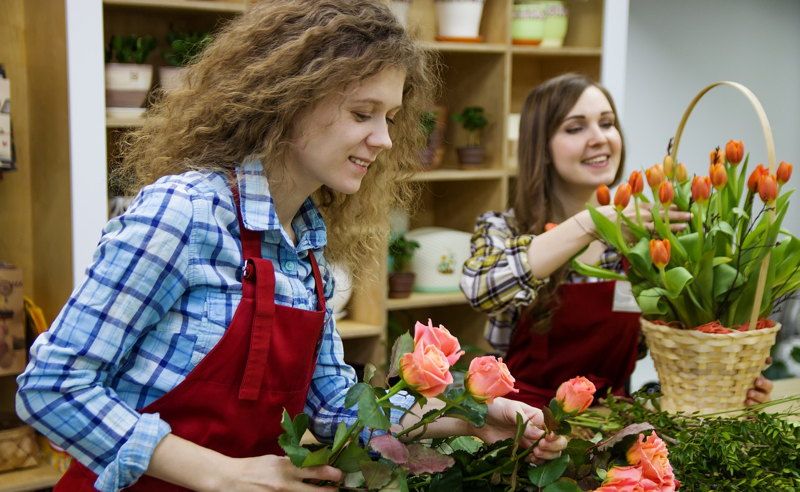 From an early age, most children see their parents go away to "work. They quickly understand that there is necessity, importance and reward in working. How and to what extent? 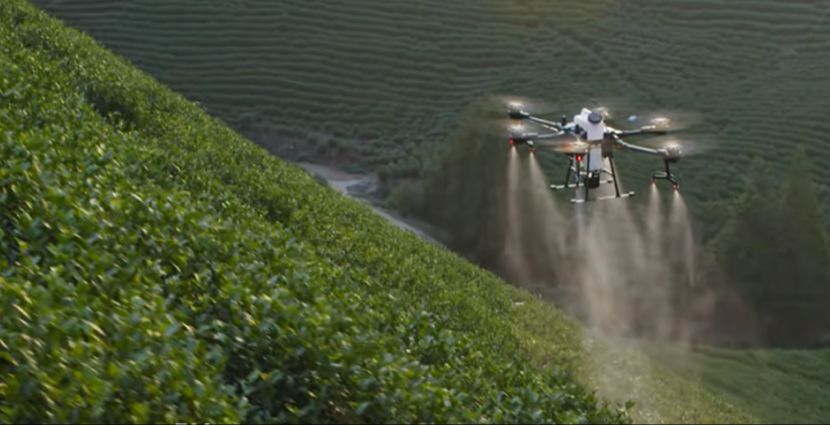 The agricultural drone is coming: endurance, intelligence and precision required

The advantages of agricultural drones are numerous and the already substantial demand is growing, as evidenced by the number of "agricultural drone pilot" job offers on job search sites. The market is rapidly evolving towards a professionalization. How to prepare for this transformation of agricultural practices? 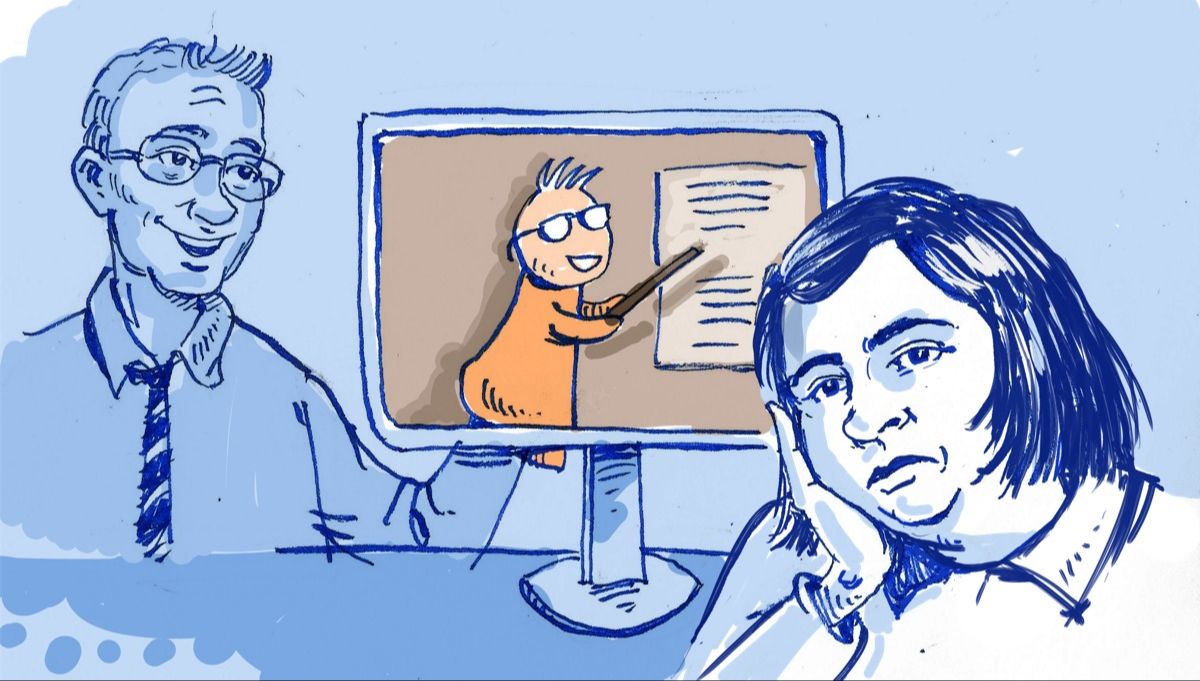 Organizing distance learning requires a whole series of pedagogical and relational skills, both individual and collective. It is necessary to design courses, resources, sequencing, anticipation, mastering computer tools... But above all, distance forces us to rethink our facilitation skills. Some guidelines can help us. 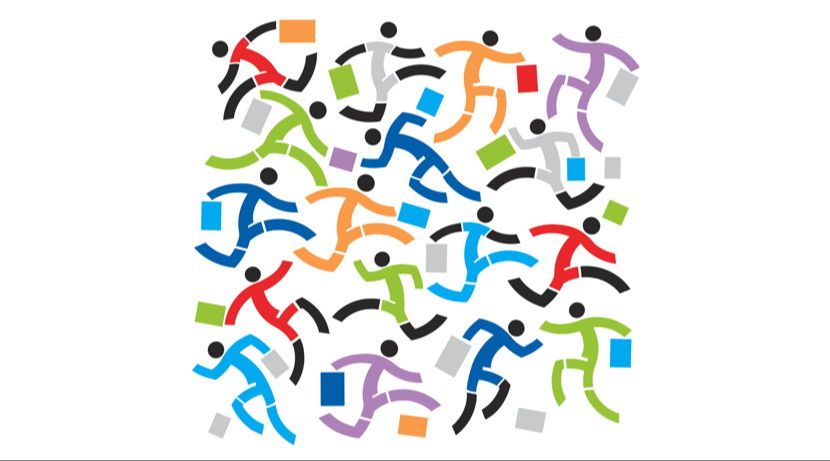 Young people, perfect targets for online business. How to go from target to mature customer.

If the school can help with prevention and can initiate the marketing strategies used towards young people, it is however almost powerless in front of the young person who succumbed to the sirens of consumption. 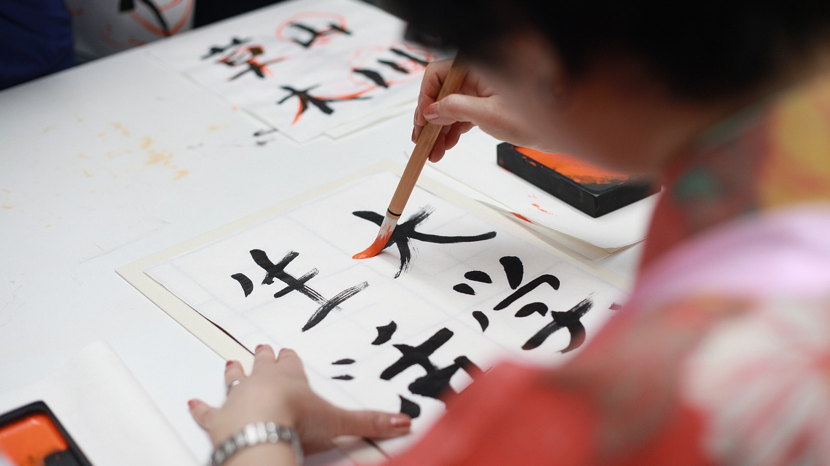 The excellent gesture aimed at in Japanese craftsmanship evokes the waza: a technique, an art and a disposition of mind.