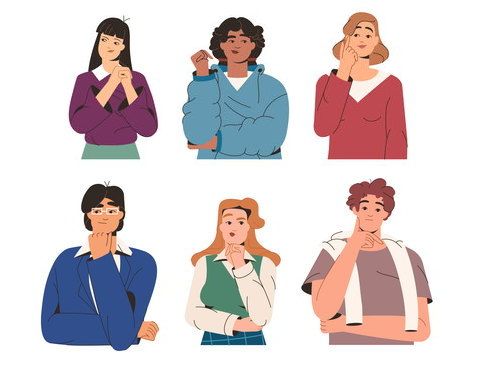 Even though we are confronted on all sides by the non-gender approach, it can lead us to a true liberation from our view of the apparent other gender, to the point of finding the true person who inhabits a body, independent of biological determinisms.

By approaching our gender relations in clothing, in language, in physical education, in kindergarten and even in our perception of colors such as pink, we come to realize how much the "social" tints our appreciation and our judgments.  The biological is very far from explaining everything and finally does not determine much while the considerations of our peers weigh all their weight. To go out of the norm makes us almost automatically dissident, marginal and susceptible to rejection, especially when it has to do with gender.

That some people are ambivalent about their sexual identity does not compare to the situation of those who have both sexes, of those whose chromosomal sex has not been expressed and of all the variations of which nature is capable. Excess or deficiency of hormones can have major effects during the periods of growth of the body, but this does not justify the social reactions of discrimination that result from it. The real problem is the social construction established around gender.

Strength, courage, sensitivity, resourcefulness, intelligence, beauty, generosity are not so much qualities associated with a particular gender as they are qualities encouraged and sought after in boys or girls almost from birth. We know many mothers whose courage, strength, and resilience are no match for those of men renowned for these qualities, but theirs are not recognized in the same way.

Inferring that this will affect career opportunities, financial success, or social recognition becomes obvious and also explains why this topic is so controversial; some discriminating societies feel particularly threatened as their power structures are challenged. New ones will certainly be created; hopefully they will be more equitable. Societies that have embraced openness seem to be doing quite well; perhaps it is a normal evolution that they no longer worry about this topic.