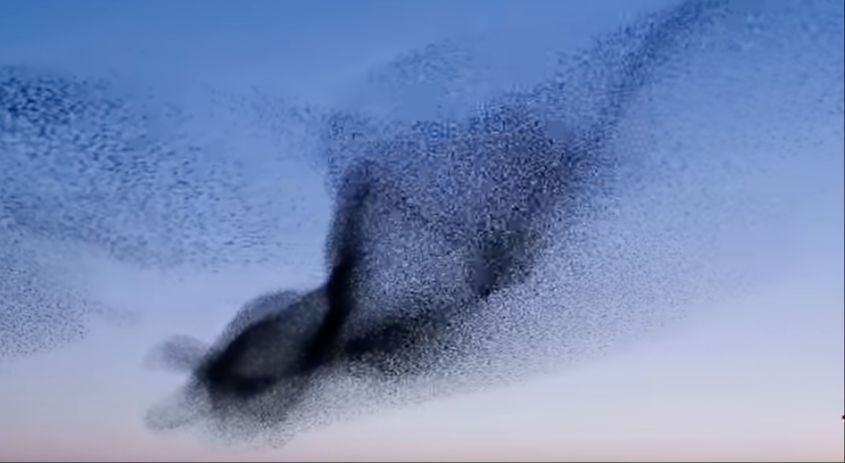 When a group functions as a swarm, individualities fade away. To achieve this state, each individual in the group focuses his or her observational abilities on the same simple and easily interpreted elements. This is the principle behind the apparently coordinated movements of hundreds or thousands of birds, fish, insects or even humans in the absence of an identified leader. This phenomenon is called "murmuration", a term derived from the French "murmure (whisper)" which evokes the noise that these clouds of birds make when we observe them at a certain distance.

This phenomenon is of interest in several disciplines, for example, in the coordination of hundreds of drones, in crowd control techniques, in the breeding of gregarious species, in marketing and even in education. The phenomenon also raises interesting questions in philosophy and sociology.

Certainly we claim some free will as individuals, but we consent in many situations to adopt the ideas and behaviors common to a group and hence to focus our attention only on certain elements. Seen from the outside, many uncoordinated social movements correspond to a murmuration, manifested by the sharing of the same referents by thousands if not millions of people and which artificial intelligences soon amplify on the networks.

School is the main vector of the transmission of referents common to a society. Murmuration has no coordination, but it can be influenced. Academic freedom comes with a certain responsibility not to teach just anything or to underestimate its significance. I am always surprised at how little social consideration there is when it comes to teaching economics, marketing, or even health. Some ideas that do not fit into the materialist mainstream are systematically dismissed. We have a right to expand our vision beyond our own group, or else our thinking skills are reduced to "a few simple and easily interpreted elements."